Thank you for your patience while we retrieve your images.

When I was an English major, reading Shakespeare, one of the central texts was E.M.W. Tillyard's The Elizabethan World Picture. It described the metaphysical world of the English during the reign of Queen Elizabeth.
These images, by contrast, display some of the world picture of people living in contemporary Elizabeth, New Jersey, named not for the English queen but for the wife of NJ Governor, Sir George Carteret, some 65 years after the death of the queen.
(Click any image to see them all enlarged.)
© Adam E Isler, 1970-2020. All rights reseved. 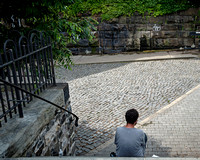